he village of Myin Sine Myanmar / Burma to Dublin.

During their honeymoon travels through Burma John and Katrina noticed an abundance of sesame and peanut oil produced there. They also learned about the variety of ways the oils can be used to cook.

Their social conscious was also heightened when they listened to stories from local people. About the 2 hour journey thought wide and fast flowing rivers that children had to take to attend their school. The idea of social conscious enterprise arose when their native tour guide began to tell them about his life. His mother owned a farm with a plantation producing Bayin which could be harvested to produce the Oils.

Because the sanctions in Burma had only recently been lifted, there were no existing delivery routes between Myanmar and Europe. Following an exhausting search they contacted Emerald Freight Express who agreed to provide a logistical supply chain solution for this product.

As Katrina said ‘’ I think social enterprise is the way to go with all businesses. When you think about what a difference a small amount of money makes to those children, it seems do obvious. 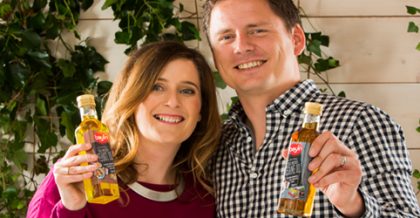 As reported in the Irish Times we’re very proud to be associated with this success story as from the outset John and Katrina had great difficulty in making arrangements to move this product until they found our Website and we were delighted to help them with their inaugural shipment. Bayin sesame and peanut oils are produced in this area where the nuts and seeds are grown, picked and then placed in a giant barrel, where the oils are extracted naturally.

As Irish agents for the World Cargo Alliance the largest Network of Independent Agents across the Globe, we had a partner / member in Myanmar / Burma who helped us move the first consignment to Dublin much to the satisfaction of John  and Katrina.

John and Katrina have established their company in Blackrock, County Dublin. They now have distribution outlets established for these products with:

This wonderful success story deserves notoriety and recognition by any measure, as we are sure you will agree.

John and Katrina can be contacted through their Website at:  www.bayin.ie