Emerald Freight > News > Emerald Freight > The Power of Nature surprises Achill Island Residents.
Achill Island lies off County Mayo on the west coast of the Ireland. Marked by rugged mountains and peat bogs, the island is known for its tall sea cliffs and clean beaches. Its breezy shoreline makes it a popular spot for water sports. The strand (beach) at Keem Bay inspired visiting writers Heinrich Böll and Graham Greene. Keel, the island’s main village, has a sandy surf beach. 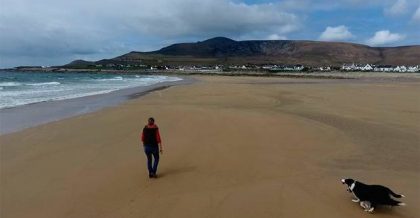 Villagers say they are delighted and surprised that the beach washed away over 30 years ago has returned to Achill Island in recent weeks.

For the first time since 1984, an large sandy beach has returned to Dooagh Bay, Co Mayo.

However, for the first time since the storms of 1984, the island’s villagers and tourists can enjoy a walk along the strand again, as the sea has deposited thousands of tons of sand onto the formerly rocky beach.

The tonnes of sand were dumped on the beach over a ten day period in April, re-creating a 300m stretch of golden beach. 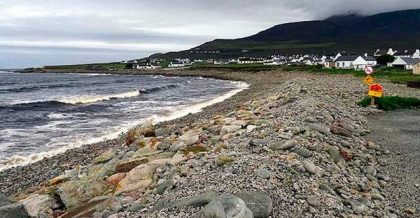 Dooagh after the storm in 1984

Since this event the Island has saw a increase in visitors and the local business owners are delighted as you can imagine.