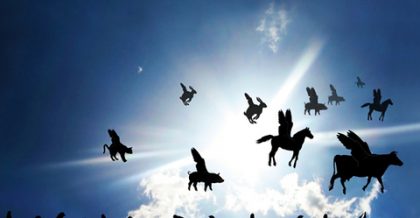 On April 20th of 2017, a very special passenger arrived on a United flight from London Heathrow to Chicago O’Hare. He was in good health and spirits the last time someone had checked on him a few hours before wheels up. But when it came time for him to change planes on the second leg of the journey to Iowa, an attendant checked on the passenger and discovered that he had passed away.

His name was Simon, and he was an enormous rabbit, measuring 3 feet in length, from whiskers to cottontail.

The public outcry was instantaneous. While no definite cause of death was determined by press time, the owner of the rabbit, a U.K.-based animal breeder named Anette Edwards, demanded an explanation and later received an undisclosed sum for compensation for loss of the animal. The breed, known as a Continental Giant, can be sold for as much as £5,000. Simon’s father, in fact, is the holder of the world record for length, at more than 4 feet.

Following just days after the infamous incident in which a doctor was injured while being forcibly removed from an earlier, overbooked United flight, also in Chicago, the death of Simon capped a nightmarish month for United. According to U.S. Department of Transportation figures, 35 animals died on board U.S. airlines in 2015. Of those, 14 died on United flights — the highest rate of any U.S. carrier.

The tragedy illustrated the importance of the health of animals that are being transported by air, whether it is in the baggage compartment of a 767 passenger jet, where Simon was, or a climate-controlled, chartered freighter modified for carrying multiple large animals. Despite the public relations risk and the expense required to ensure the safety of animal transport, business is booming now for forwarders and carriers willing to serve this niche.

In an era where capturing specialty, high-value cargo can be the difference between profit and loss each quarter, the movement of livestock and exotic animal charters is an increasingly attractive option – especially when large mammals are involved.

“The first half of 2017 has seen increased live animal shipments over 2016, and we expect this trend to continue,” said Cindy Brown, manager of air service development and workforce charters, cargo and logistics, for the Calgary Airport Authority at Calgary International Airport (YYC). “Our facility has seen everything, including equestrian horses, alpacas, pigs and deer come through it. We’ve had a few of the larger specialized mammals come through as well because of our closeness to the Calgary Zoo.”

Interest in animal transport is also building not just because of the niche income but because of rumors that International Air Transport Association (IATA) may soon launch a new Center of Excellence for Independent Validators (CEIV) program specially designed for Live Animals. While IATA officials would not comment publicly on a timeline for a CEIV-Live Animals certification, there have been discussions about how the program would work.

Should a CEIV-Live Animals standard emerge in the next few years, the physical proof of certification in safe handling methods could prove to be a lucrative accolade for a forwarder, a ground handler or an entire airport community to attract shippers who never want to hear about another sad Simon story.