Maersk line has the Largest Containership in the World

The ‘Madrid Maersk’ is the first of 11 EEE mark II class boxships due for delivery and has the capacity to carry 20,568 TEU, though Maersk would be aware that their reign will be short lived considering OOCL Hong Kong are set to deliver a 21,200 TEU.

MOL were taken by surprise at the Madrid Maersk’s size and today released a statement announcing the arrival of the MOL Triumph’s ‘the worlds largest containership’ arrival to Shanghai Port. 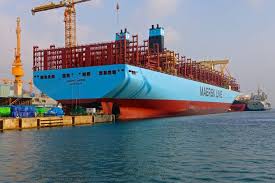