As expected the first rail freight service from the UK to China departed on its 17-day, 7,500-mile journey.

The containers consisted of British soft drinks, vitamins and baby products.  30 containers in total was carried by the train, which will be a regular service from now on.

After going through the Channel Tunnel, the train will pass through seven other countries before arriving on 27 April.

They are France, Belgium, Germany, Poland, Belarus, Russia and Kazakhstan.

The operators boast that it is cheaper to send goods by train than by air and faster than by sea.

The service is part of China’s “one belt, one road” programme aimed at reviving the ancient Silk Road trading routes with the West, dating back more than 2,000 years ago.

The first rail freight service in the opposite direction, from China to the UK, arrived three months ago. 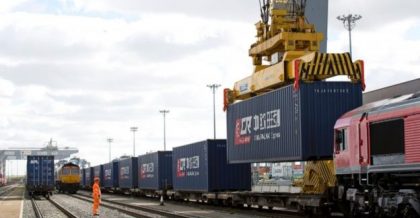 The chairman of Yiwu Timex Industrial Investment Co, Xubin Feng is organising the service, he said restoring the Silk Road route was “an important and exciting initiative”.

“We have great faith in the UK as an export nation and rail provides an excellent alternative for moving large volumes of goods over long distances faster,” he said.