Flights in and out of Cork Airport were disrupted this morning after the airport was forced to close due to a drone flying in the area.

Gardaí were on site investigating.

A spokeswoman for the airport said that service did resume but  “with caution”.

“There was a drone spotted in the airport and we had two aircraft on hold but now pilots have been told to come back in, obviously with caution”.

Two airplanes were forced to circle the airport and were unable to touch down during the incident after the drone was spotted at 9.45am this morning.

“Gardaí were on the look out for the offender. 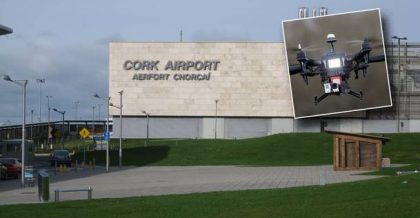 Cork Airport was the first Irish airport to launch a ‘no drone zone’ as part of a crackdown on rogue drone operators last year.

It is illegal to operate a drone within 4.5km of an airfield under new rules introduced by the Irish Aviation Authority.