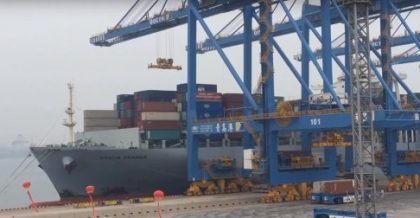 QQCTN has plans to operate sustainably around the clock with six fully automated berths over 2,088 metres of quay.

The new fully automated terminal is controlled by smart laser scanners and positioning systems that will locate the four corners of each container and accurately clamp and move them onto driverless trucks.

This smart technology allows the terminal to operate in complete darkness during the night, which has reduced labour costs by 70% and increased efficiency by 30%, meaning that the 60 workers that would normally be needed to unload a cargo ship before has been reduced to an unbelievable nine workers.

Automated guided vehicles are programmed with routes and tasks and also have the artificial intelligence to recognise when a recharge is needed.

The terminal is part of China’s One Belt One Road initiative.

Watch: Why China is Building a New Silk Road

A series of interviews by New China TV starts with the manager of the terminal’s automated quay cranes (video below).

Translated from Chinese to English, he explained that the intellectual property of the port has been independently designed.

Focusing on the different lengths of the quay crane girders, he said: “We have chosen this design through a lot of simulation and emulation to create efficiencies and lower the cost.

“We have cut the length of the backreach from the typical 28 metres to twelve metres in order to … optimise the structure of the quay crane and lower the cost.

“Most importantly, it has lowered the tire pressure across the whole terminal to make efficiencies.”

A worker from one of the port’s less automated terminals evaluated the new development.

Highlighting three advantages, he said: “The first one is the high efficiency. The second one is that it’s advanced and the third one is the human cost as it cuts the numbers of the staff and lowers the dependence on quay crane drivers.

Watch the video below: