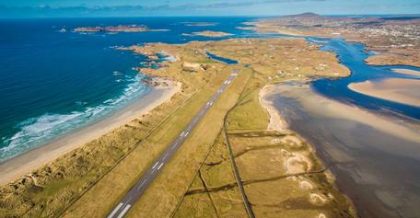 Please take a moment to imagine arriving into land onto this beautiful runway, well this is Donegal Airport which has just been awarded the worlds No 2 scenic runway.

Over 8,000 members of the public vote on a shortlist chosen by a panel of international travel experts, with 122 airports nominated.

“You will not see anything like it anywhere else on earth,” gushed one travel fan of Donegal Airport’s stunning setting next to the Atlantic at Carrickfinn.

“Donegal at number two is rapidly becoming an AvGeek fan favourite,” added Adam Twidell, CEO of PrivateFly.com and himself an experienced pilot.

The county is enjoying a run of awards this year, having already been named one of the world’s coolest places to visits by National Geographic Traveller UK, and voted Ireland’s Hidden Gem in Independent.ie and Weekend Magazine’s Reader Travel Awards.

Saba (above) is home to the world’s shortest commercial runway, at just 400m (1,321 feet) in length. Pilots must undergo special training to land at the airport.